Water purification tablets are an easy and convenient way to make sure the drinking water you pull from that mountain stream won’t come back to haunt you. Even the most tranquil and idyllic looking water source can harbor a plethora of microbial nasties intent on wreaking havoc. So it’s important to have some way to ensure they don’t.

Of course, hikers and campers aren’t the only ones who might need to purify water before they drink it. Soldiers, those enduring the aftermath of a natural disaster and those working for NGOs in underdeveloped countries also need to be careful about what goes in their canteen or nalgene bottle. Below, we’ve brought together the 10 best water purification tablets currently available. Potable Aqua PA Plus tablets use tetraglycine hydroperiodide (1) to neutralize microbial contaminants and make water safe to drink. Tetraglycine hydroperiodide is a form of iodine that provides an effective defense against giardia lamblia and other water-borne bacteria. The company is aware that iodine can leave, what many consider, an offensive aftertaste, so they provide two types of tablets.

The first contains the tetraglycine hydroperiodide to purify the water and the second (the ‘Plus’ of the name) neutralizes the unpleasant aftertaste. The company recommends you use 2 purification tablets for each quart of water and that you match them 1 for 1 with a ‘Plus’ tablet. Works in about half an hour. Very effective. If there’s a downside here it’s that they come in a bottle. Once that bottle is opened the shelf life is reduced to a year or less. Chlorine dioxide is considered by many to be the most effective agent for purifying iffy water. It does a good job against the major pathogens giardia lamblia and cryptosporidium. Like Potable Aqua, Aquamarine takes a two tiered approach. But their second tier is not intended to address taste.

Instead the first part addresses the pathogens and the second contains phosphoric acid (2) that fends off the growth of mold in your water bottle. Instructions say to place 7 drops from each bottle into an ounce or so of water. When that water turns entirely yellow (which usually takes about 5 minutes) you add it to a liter of water you want to drink and let it sit for 15 minutes. If you are concerned the local water is more contaminated than most simply double the dosage. It won’t hurt you. The company states the product has a 4 year shelf life. There is some confusion about whether the Rothco Chlor-Floc water purification system takes tablet or powder form. To be absolutely clear you’re provided 30 packets of chlorine powder, not tablets. Each packet of powder is able to purify 1 quart of water. They do an effective job neutralizing the threat of giardia and some other, lower-level bacterial contaminants.

But the real selling point here is how fast they work. Whereas most chlorine tablets take at least half an hour, and chlorine dioxide typically takes 4 hours, these will work in 15 minutes. The 30 packages provided here will purify 8 gallons of water. If there’s a downside it’s that the shelf life is around 6 months. Even though the packets are sealed. 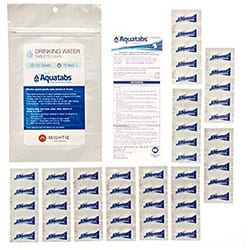 Each Aquatabs water purification tablet contains sodium dichloroisocyanurate (NaDCC). When it comes into contact with water NaDCC releases hypochlorous acid, otherwise known as chlorine. These easy to use tablets are standard fare for WHO field workers, soldiers and others who toil in areas where potable water is in short supply. 2 tablets are sufficient to purify 1 quart of water.

In total you get enough tablets to purify 20 gallons (75 liters) of contaminated water. Just drop the appropriate number of tablets into your water bottle, shake and let sit for 30 minutes. Aquatabs are individually sealed and have a shelf life of 5 years. While Aquatabs are widely known and used their downside is the fairly strong chlorine taste. Some will mind, some will not. Katadyn Mircropur MP1 tablets use chlorine dioxide to purify contaminated water. Thought by many to be the most thorough method of purifying water chlorine dioxide provides effective protection against both giardia and cryptosporidium. Each tablet here is designed to treat 1 liter of water.

The marketing claims that, in some circumstances, it works in 30 minutes. But chlorine dioxide typically takes 4 hours, and that’s how long we’d recommend waiting. Besides being effective at neutralizing the worst waterborne contaminants chlorine dioxide has the added benefit of leaving no nasty aftertaste. Potable Aqua makes a number of water purification products. We already took a look at their PA Plus tablets above. These Anti Germicidal water tablets are identical to those you’ll find in the PA Plus system. But what you won’t find here are the secondary ‘Plus’ tablets intended to make the water taste better. The tetraglycine hydroperiodide used here is a form of iodine, with a reputation for leaving a less than pleasant aftertaste.

Those who can’t stand that aftertaste should choose the PA Plus tablets. Those who aren’t bothered by the taste of iodine will find all they need here. Simply plop one tablet into a liter of water and wait a few minutes for it to dissolve. Then shake the bottle to distribute the iodine and let the water sit for 30 minutes before drinking. 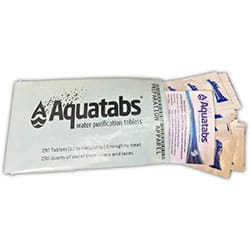 These are the same formula as the Aquatabs we profiled above. The difference is that you get 250 tablets instead of 100. This is good for large groups heading into the wild, or large families who want to be prepared for the worst.

The 250 tablets are enough to purify up to 500 quarts of water using sodium dichloroisocyanurate (NaDCC), which releases chlorine when mixed with water. If you’re an aid worker headed to a remote or storm ravaged area you should consider taking these with you just to be prepared for any eventuality. Hikers and those in conflict zones aren’t the only ones who need to be concerned about having clean water to drink. If you live in an area that’s prone to hurricanes, flooding or other types of natural disaster you should always have a stash of clean water set aside in case you need it.

In those cases it’s important the water not become fouled while waiting to be used, which can sometimes happen. To keep your emergency water clean and safe to drink use this Water Preserver Concentrate. There’s no magic here so take the ‘proprietary formula’ marketing nonsense with a grain of salt. The product uses a form of bleach to prevent bacterial growth in stored water. But it works. 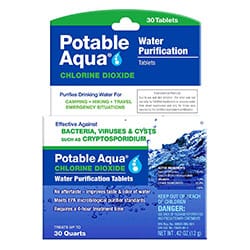 Potable Aqua makes one last appearance on our list with their Chlorine Dioxide Water Purification Tablets. As we’ve mentioned chlorine dioxide is considered to provide the highest degree of protection from the widest variety of bacterial and parasitic contaminants including giardia and cryptosporidium.

The downside is that you’ll need to wait 4 hours before drinking the water. So fill up your bottles and add some of these tablets before going to sleep. When you wake up you’ll have plenty of safe water to use however you want. 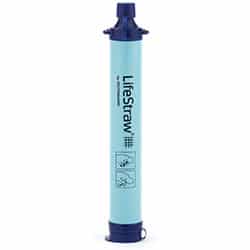 For some people, water purification tablets are a non-starter. If you’re one of those folks consider the Lifestraw Water Filtration System. The Lifestraw is incredibly easy to use. Just remove the caps from each end, stick the bottom end into your drinking water and suck the water through the upper end, just as you would a straw.

The filter in the Lifestraw removes 99% of waterborne bacteria and parasites. It surpasses EPA water filter standards, is affordable and will filter 1,000 gallons of water.

Mountain streams often seem idyllic. But animals don’t have the same aesthetic sense as humans. They tend to relieve themselves wherever and whenever the notion strikes them. Even if that’s at the edge of one of those idyllic mountain streams. Come to think of it, there are plenty of people who do the same thing without thinking. Animals also have a nasty habit of dying in water or in proximity to water. And that can lead to all kinds of microbes entering your Nalgene bottle when you dip it into the stream. Here’s a more comprehensive list of those who should use water purification tablets.

Do All Water Purification Tablets Work the Same Way?

What are Some Common Bacteria That Affect Hikers?

As we mentioned there are a number of situations that call for water purification tablets. But exactly what are these tablets protecting you from?

As long as the package has not been opened a water purification tablet will last about 5 years. But keep in mind that once you open the package that life expectancy takes a significant hit. While it’s impossible to estimate exactly how much of a hit it’s safe to assume that any tablets exposed to the air will lose their effectiveness in a few months. This is one reason why so many people prefer to buy tablets that are individually sealed, rather than buying one big bottle of loose tablets.

What are the Main Types of Water Purification Tablets?

Now let’s go back and take a closer look at those 3 types of water purification tablets.

How do Water Purification Tablets Work?

Chemically, the different types of water purification tablets work in different ways. And there simply isn’t room here to go into a detailed analysis of the chemical mechanisms of each. In the broadest, general sense, however, the process for using a tablet like this is as follows:

Always defer to the specific instructions on the actual product.

Are There Other Ways to Purify Water?

Not everyone wants to use water purification tablets. Some don’t want to spend the money, others don’t want the chemical taste that they can bring and some just don’t like the idea of adding anything to their drinking water. For these folks there are options. Those options are:

Water purification tablets are a smart choice for anyone planning to spend time in an area where safe tap water may not be available. In this day and age, it is never a bad idea to be prepared and have these on hand. They’re light, effective, affordable and can prevent you being besieged by very nasty parasites like giardia lamblia and cryptosporidium. Any of the above water purification products should protect you from the wrath of environmental microbes. They’ll ensure you have a safe patrol or camping experience, or that you’re able to survive in the aftermath of a natural disaster. The Olantern Classic 2 Pro Camping Lantern is durable and powerful. This camping lantern is made by Olight which continues to deliver quality and bright products. This rechargeable lantern features lumens ranging from 10-300. 300 Read more… Body armor has saved the lives of countless individuals over the past several decades, but hard plate body armor, the type designed to stop rifle rounds, has one glaring shortcoming: buxom women need not apply. Read more… Using a Tactical Flashlight as a Self-Defense Tool

The world has not been this polarized since the 1980s. Today, any sense of accommodation and camaraderie is a distant memory. You either agree with someone or you’re the moral equivalent of Hitler. Combine that Read more…